1. The separate or combined analysis of trend and Fractal wave is possible.

3. Equilibrium Fractal Wave is just a superclass of all the periodic wave patterns we know.

First, let us demonstrate the equilibrium fractal wave for readers. The easiest way to demonstrate the equilibrium fractal wave is through the pattern table presented in Figure 1-1 (Seo, 2017). Many applied researchers in time series and statistics will agree that patterns in the column 1, 2, 3 and 4, from first regularity to fourth regularity, are the mainly extracted features and patterns in their everyday research and operation. It is also agreeable that cyclic wave pattern can co-present with trend together. This concept is the main assumption behind the classic decomposition theory in the time series analysis. In the time series pattern table created by Gardner in 1987 (Figure 1-2) represents this concept clearly. The first row in the pattern table (Figure 1-1) shows the data in which no trend or weak trend exists. The second, third and fourth rows shows the co-existence of trend and waves.

Until now, many forecasting or industrial scientists use such concept to build forecasting models. Likewise, there are many applied software to create the forecasting or prediction model of this kind. Some example forecasting software with such modelling capability includes:

Figure 1-1: Five Regularities and their sub price patterns with inclining trends. Each pattern can be referenced using their row and column number. For example, exponential trend pattern in the third row and first column can be referenced as Pattern (3, 1) in this table.

Figure 1-2: The original Gardner’s table to visualize the characteristics of different time series data (Gardner, 1987, p175). Gardner assumed the three components including randomness, trend and seasonality in this table.

Now the fifth column in Figure 1-1 presents the equilibrium fractal wave. This is extended part from the original Gardner’s table (Figure 1-2). When we list the equilibrium fractal wave in the fifth column, we can see that the pattern table (Figure 1-1) shows a systematic pattern. From left column to right column, we can see that the number of distinctive cycles in the data increases. For example, we can assume the pure trend does not have any periodic cycle. Therefore, number of the distinctive cycle is zero for pure trend series. Under the second and third columns, we can have one to several distinctive cycles depending on if the series follows daily, monthly, and yearly cycles. Under fourth column, we can have many more distinctive cycles outside daily, monthly and yearly cycles but the number of the cycles is finite. Fourier analysis or principal component method can be used to reveal the number of cycles for any series under column 4. From column 1 to column 4, you might be following this systemic pattern pretty well.

Indeed, scientists use the two-step process to model the data in column 2, 3 and 4 in economic and financial research. For example, price series under column 4 can be modelled with trend in the first step. Then the reminding data can be modelled using cycles in the second step. Likewise, for a data series under column 5, we can model a trend part first, then we can model a fractal wave patterns in separate steps. This explains the Proposition 1. This also imposes the fractal analysis under non-stationary condition when the trend component is strong in the data series. In this case, two-step modelling process might be advantageous. When the trend component is less dominating comparing to fractal wave component, the entire price series can be modelled using fractal analysis only. Proposition 1 states that the choice on the modelling process, either one-step or two-steps, is conditional upon the characteristics of the price series.

Now let us walk backwards from this combining process. Let us assume that we can extract those patterns in the same scale from rest and we can put them on the separate paper for each scale. When we separate those patterns in the smallest scale from rest, then the extracted series become the first cycle of our data. This extracted series with one cycle is not different from data or a series in column 2, 3 and 4. Likewise, we can separate the second smallest patterns from rest. This will become second cycle of our data. In this time, the frequency of second cycle will be less comparing to the first cycle because the period of second cycle is greater than first cycle. We can keep continue this separating process to create another cycles. Since we can combine to create the repeating patterns infinitely, we can separate the repeating pattern infinitely too. This describes the proposition 2, the infinite number of distinctive cycle.

Now the Proposition 2 can lead to the Proposition 3 naturally. As you can see from Figure 1-4, from left to right columns, the number of distinctive cycle increases. Therefore, it is not so hard to say that equilibrium Fractal Wave is a superclass of all the periodic wave patterns we know in column 1, 2, 3 and 4. Figure 1-4 shows this concept clearly to our reader.

Figure 1-4: Visualizing number of distinctive cycle periods for the five regularities. Please note that this is only the conceptual demonstration and the number of cycles for second, third and fourth regularity can vary for different price series. 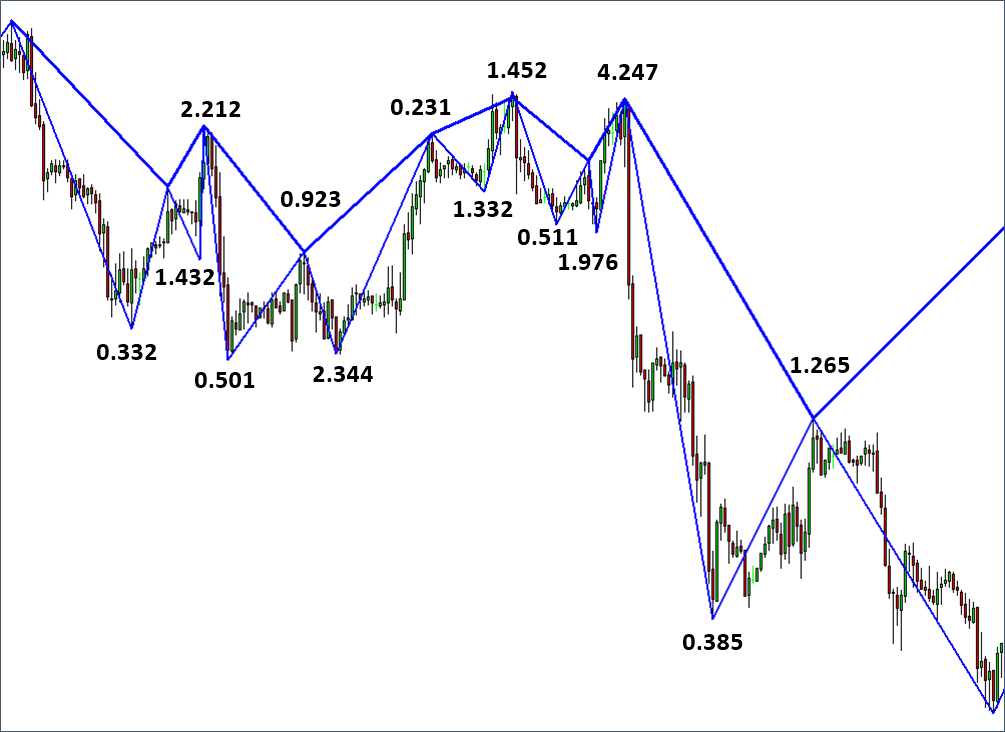 One exception is the financial trading community. In the trading community, the repeating patterns or repeating geometry was used as early as 1930s. Some pioneers include R. Schabacker (1932), H.M. Gartley (1935) and R.N. Elliott (1938) in time order. In their books, the various repeating patterns were described for various US stock market data (Figure 1-6, 1-7 and 1-8). Until now, millions of traders are using these patterns in their practical applications for the profiting purpose in forex, future, and stock markets. Figure 1-6, 1-7 and 1-8 shows the commonly used repeating patterns by the financial trader. Having said that these repeating patterns in Figure 1-6, 1-7 and 1-8 were not modelled as the co-subject between trend and fractal wave. Instead, those repeating patterns are only modelled as the subject of fractal wave. Only exception is the trend filtered ZigZag indicator and excessive momentum indicator created recently (Seo, 2018). This is understandable consequence because the idea of equilibrium fractal wave and the two-step modelling process were only introduced in 2017. The modelling technique using trend and fractal wave patterns are only available recently. One very purpose of this article is to inform you that it is possible to model the financial price series as the co-subject between trend and fractal wave in two separate steps.

The pattern table in Figure 1-1 shows that repeating patterns are merely the extended concept from the conventional mathematical knowledge. We know that it is not so hard to put these five regularities together under the same table. Potential for academic and applied research in equilibrium fractal wave is huge. The main concern is that many techniques used for periodic wave pattern analysis may not work with equilibrium fractal wave because of the infinite number of the distinctive cycle in the data. To the best knowledge, Fourier analysis and many other similar techniques will not handle the infinite number of the distinctive cycle. Therefore, developing new analytical techniques remain as the main challenge for the empirical research in equilibrium fractal wave. In many cases, the algorithm or pattern recognition modelling the price series as the co-subject of trend and fractal wave will improve the prediction accuracy much more. 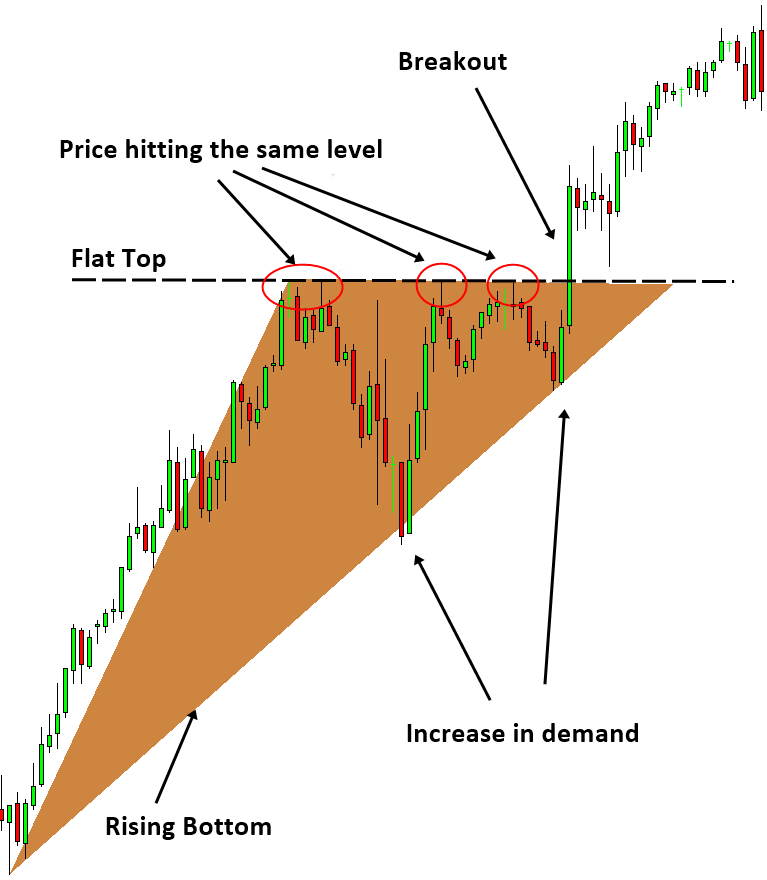 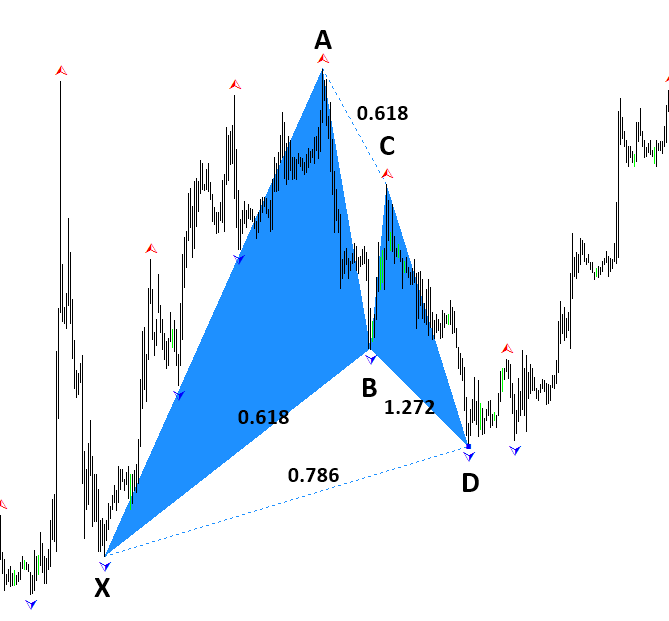 This section discusses the separate concern from this article. However, this part serves another important purpose for this article. In previous chapter, we have shown that equilibrium fractal wave in column 5 extends the structure of trend and wave in column 2, 3 and 4 of the price pattern table (Figure 1-1). We were able to create the systematic framework for data with zero to infinite number of distinctive cycles. For convenience, we will call the wave and trend structure as equilibrium wave as shown in Figure 1-9. Equilibrium wave is common data structure found in real world. The important characteristic of Equilibrium wave is the finite number of periodic cycles. The cycles in equilibrium wave are periodic and we can measure how long the cycle lasts with our stopwatch. Many social and non-social data can show strong behaviour of equilibrium wave too. The periodic cycles can be modelled well using Fourier analysis and other similar techniques. As we know, Fourier analysis and the quantum physics have a strong connection. Fourier analysis can be used to decompose a typical quantum mechanical wave function. In addition, the trend part of equilibrium wave and particle part of quantum physics can be modelled through many common analysis techniques in the statistics, signal processing, and object tracking field too, for example, Kalman filter or similar techniques. Therefore, it is not so harsh to say that equilibrium wave in column 2, 3 and 4 in Figure 1-1 closely resembles the idea of wave and particle duality of the quantum physics.

To the best knowledge, both data structure is not 100% compatible. However, there is certainly some compatible structure between equilibrium wave and wave-particle duality. For this reason, we could make some analogical reasoning here. As we can extend the classic wave pattern into equilibrium fractal wave pattern (Figure 1-1), we might be able to extend the quantum physics further to deal with the infinite number of distinctive cycles. It is often heard that many quantum physics based algorithms fail to bring the profits or good prediction in the financial trading. The reason might be that the contemporary quantum physics is not dealing with the infinite number of distinctive cycles present in the data. Although this might be just guess for now, the modified quantum physics might work better in the financial trading than the contemporary quantum physics. If they do so, then the modified quantum physics can possibly lead to the potential technological breakthrough in developing better medicine and better spaceship in the future. This is just some research ideas for those working in physics in a hope to provide some alternative solutions to many unsolved problems in this world.

Kang, S. Y. (1992) An investigation of the use of feedforward neural networks for forecasting, unpublished thesis Kent State University. 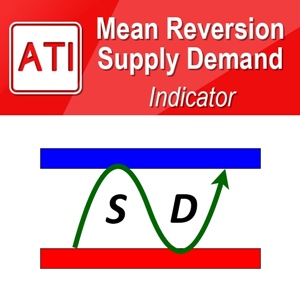