We believe that you have the complete understanding on how to use the geometric prediction equation in your financial trading by reading all the guidance given in this book. In fact, the geometric prediction equation can be applied outside the Forex and Stock market trading. For example, the fashion, architecture, and engineering are all applicable area. You can always bring the general version of geometric equation for your area. By tuning the equation for your specific needs, you can make the successful career in your industry. Just remember that in some industry, you might have to consider the colour variable in your equation to make the geometric prediction more accurate. In addition, you might have to tweak the type of variables in both statistical regularity and geometric regularity. 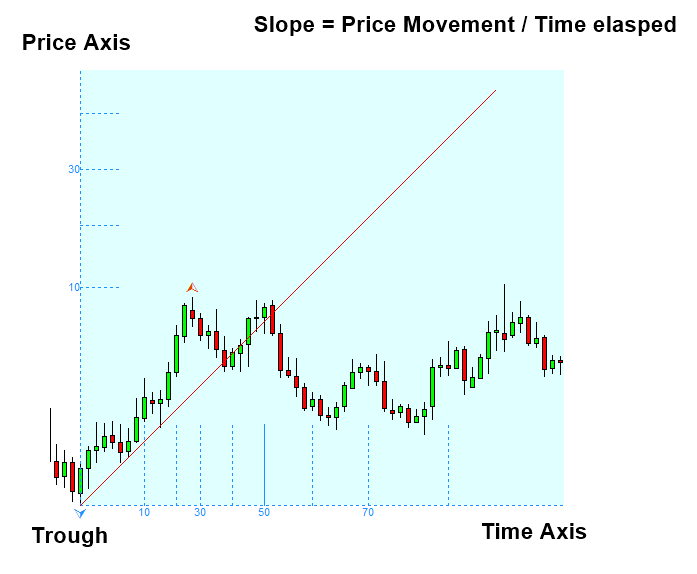 Figure 4.7-1: The conceptual drawing of slope in the candlestick chart

Let us have a look at the first idea of using the slope in the financial trading. The very first idea of applying the slope (or angle) in the financial trading was conceived by W. D. Gann. In 1935, Gann used the angles to predict the Stock market. He also shared his idea through his written course (Gann, 1996). In his book, he measured the angle using the ratio of 1 unit price to 1 unit time. He recommended using the paper with 8 x 8 grid to inch to draw these angles. He presented the nine important angles for trading. The first important angle is the 1 x 1 angle where 1 unit of price movement is equating to 1 unit of time movement. 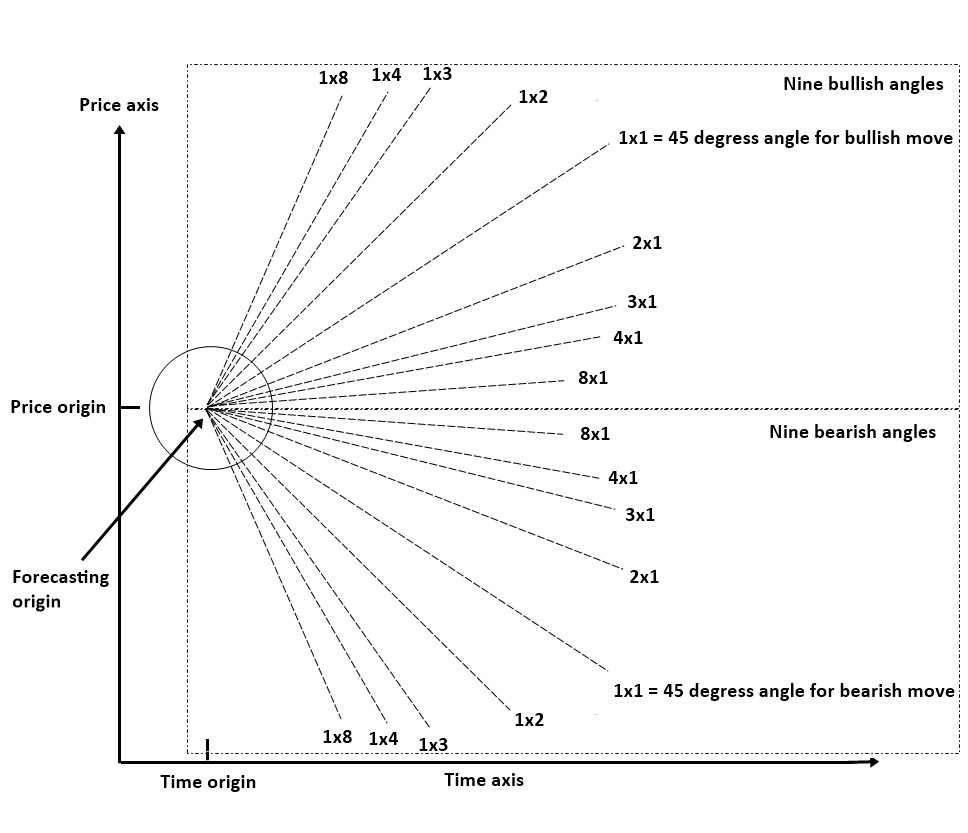 The concept of Gann Angles is appreciated by many traders. However, there is a fundamental problem in implementing the idea. The question on scale remained unresolved for many decades since Gann invented the nine angles in 1935. The question is how do we equate 1 unit of price to 1 unit of time. The question is well phrased in the Wikipedia in the Layman’s terms (Visited on 2020 April 13, https://en.wikipedia.org/wiki/Gann_angles).  For example, if we try to equate 1 point of Dow John’s industrial average to 1 bar in the chart, it does not have much meaning in our trading because Dow Jones industrial average is now trading at 23,000 points. Now some people suggest that it might be better to use the certain number of points like 100 or 1000 points instead of 1 point. For example, it is the suggestion you can read from Wikipedia (Visited on 2020 April 13, https://en.wikipedia.org/wiki/Gann_angles). This might work for one specific instrument. However, this is not the universal solution across all the instruments. For example, say that we applied 1000 points for Dow Jones industrial average successfully. Would this 1000 points work for S&P 500 index, the performance of 500 large companies listed on the US stock exchanges? Well, S&P 500 index is trading at 2,789 points for the time being. Using 1000 points to equate 1 bar, you can only draw 3 price unit in the price axis. You can tell that equating 1 price unit to 1 time unit is troublesome as well as equating a certain number of points to 1 time unit.

What is even worse? Many of us do not use the daily chart. We want to use 1 hour chart, 5 minutes chart, 4 hour chart, and so on. This is the typical provision from the modern charting platform. Using this approach, what worked in daily chart will not necessarily work in the rest of charts. When your chart timeframe is different, you are having different number of bars in your chart. For example, if you are having 1000 bars in your daily chart, you will have 8000 bars in the 1 hour chart in the case of US Stock market. Hence, the same points can not be used across different periods of the chart. This simple math reveals that this idea of angles can not be implemented in this way because we have to keep choosing different number of points per instrument and per timeframe. If you are trader, this is troublesome. In another words, we have a consistency issue here with this approach.

This is only technical side of story though. Fundamentally speaking, there is no theoretical guidance on how many number of price points we have to use for 1 time unit. Hence, even if you have chosen some number of points, it is hard to back up your choice with any theoretical point of view. In summary, implementing Gann Angles can introduce huge subjectivity in our trading. Subjectivity is bad. It makes us hard to reproduce any profitable strategy or profitable trading system.

All these implementation problems behind Gann Angles can be understood. For example, in 1935, it is rare for someone to have an electronic charting platform on his personal computer. The accuracy offered from the modern electronic charting platform now is all missing back then. For example, backtesting and other computer simulation help us to study hundreds of trading ideas over the night for many different instruments. In 1935, one can have a good idea for trading but it is possible that his idea can remain unstudied for many different instruments. We still respect that Gann’s ability to see the value of angles for trading without the help of any personal computers. It is no doubt that he is the great pioneer in the industry. Now we will show you how to overcome this inconsistency and subjectivity in using Gann’s Angles (aka Gann’s Fans).

There is no perfect thing in this world. We still have some issues using the probability too. For example, in practice, we use empirical probability based on available price data. Hence, there could be some discrepancy in our probability measurement between theoretical and empirical one. However, this is minor problem in comparing to the huge roller coast experience using the angle of 1 point per bar or 1000 points per bar. When you use probability, you do not have to worry about picking up new value for the angle every time. You can just use one setting for every different instruments and for different timeframes. They will divide price and time with sensible spacing automatically for your trading. Hence, Gann Angles with probability is an automated version of the original Gann Angles. In addition, it provides much less subjectivity over the original version. In Figure 4.7-3 and Figure 4.7-4, we provide bullish and bearish examples of Gann Angles with probability. 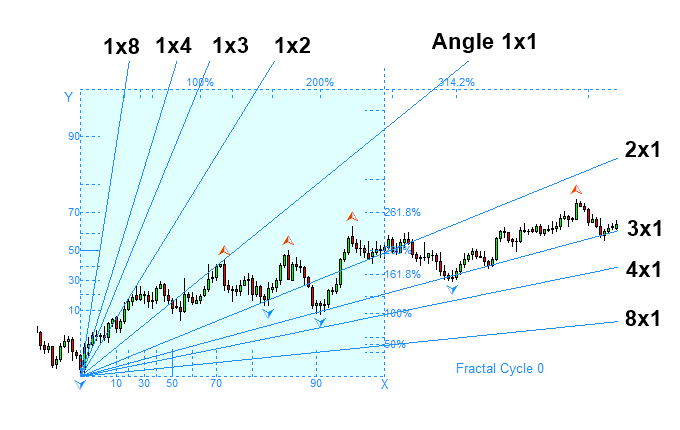 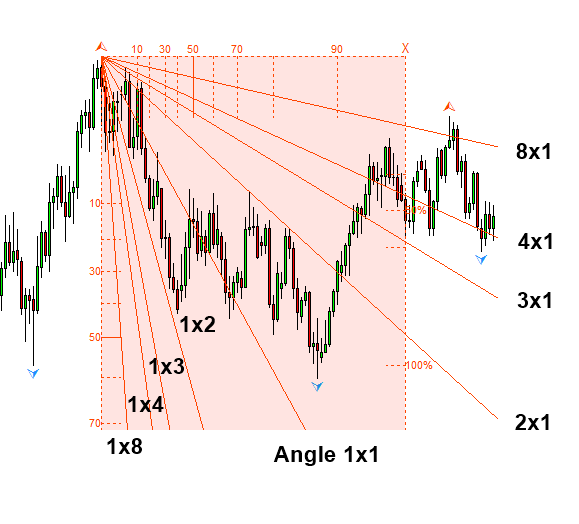 Hence, the most important application of Gann angles is measuring the speed of market. For example, in Figure 4.7-5, the price departed with high speed from trough. Then we can see that market is going through some speed reduction reaching from 1×3 line to 2×1 line. When we know the speed of the market, it helps us to read the market intention better. 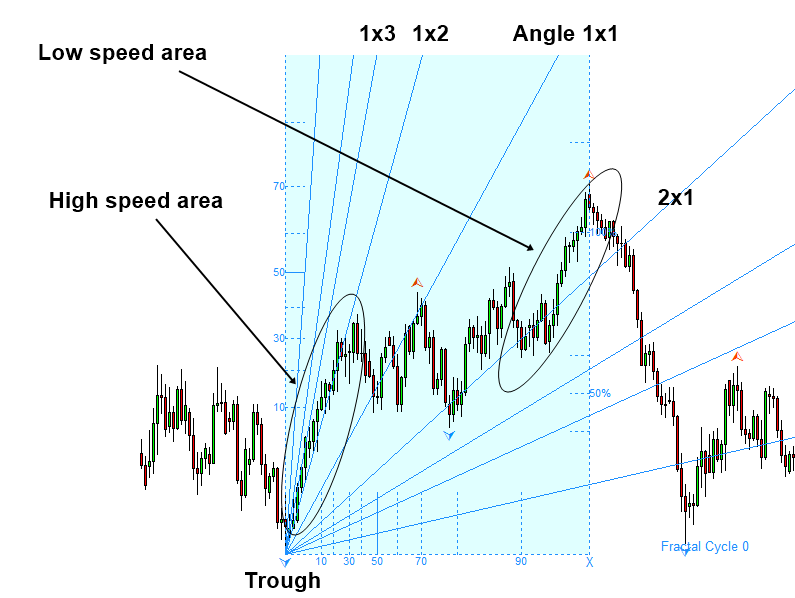 Likewise, in Figure 4.7-6, the price departed with high speed. Then we can see that market is going through some speed reduction reaching from 1×3 line to 1×1 line. Such a speed reduction helps us to predict a turning point with good reward to risk ratio often. 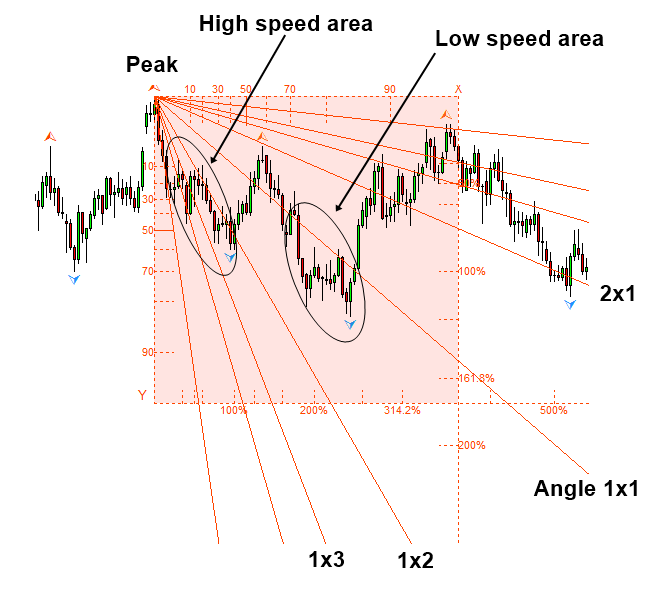 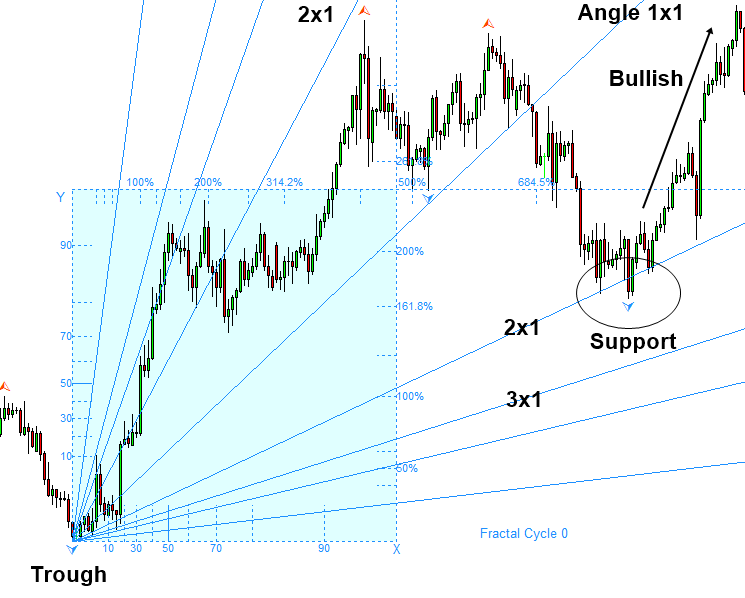 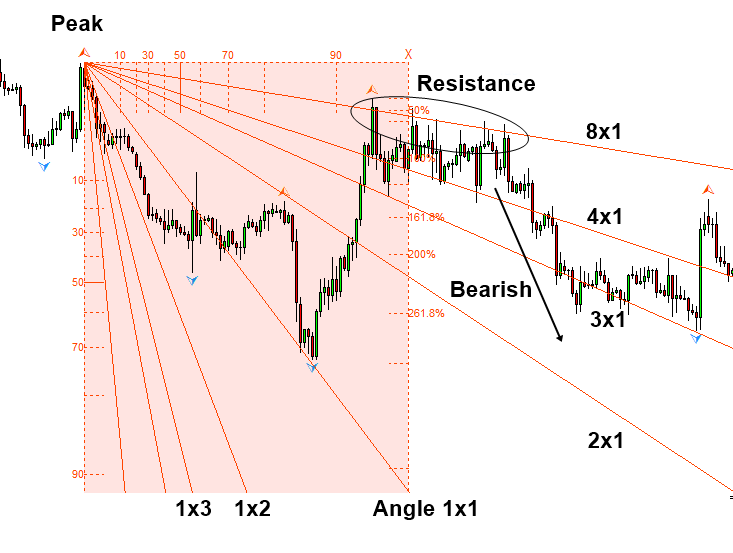 When you use Gann Angles, picking up the location of Gann angles is another important consideration. Location of Gann angles can affect the accuracy of your prediction. Typically, you will start with either peak or trough. When price is moving upwards, you will typically select a trough to project the nine angles. Often it is recommended to use the lowest trough to project the nine angles. This does not mean the adjacent trough cannot be used at all. All we are saying is that it could be rather less optimal. The reason for this is that the distant trough provides better spacing between the angles lines. It is important that you keep the sufficient distance between the point of interest and the origin of Gann angles. Analogically speaking, it is like that moving average with 13 bars is more prone to noisy movement than moving average with 100 bars. 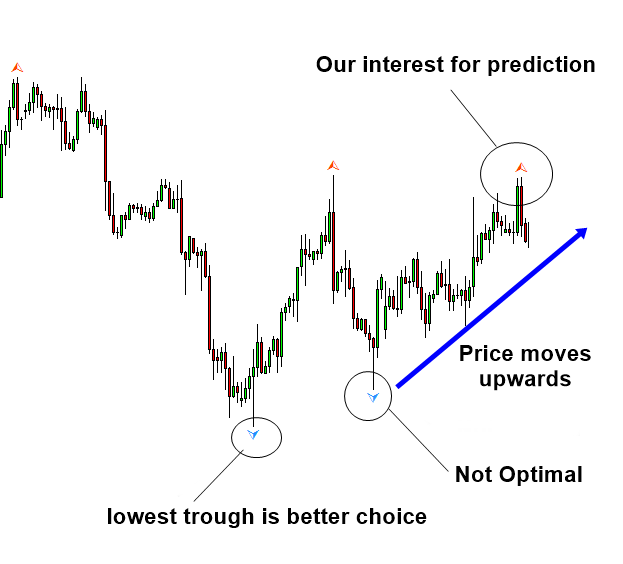 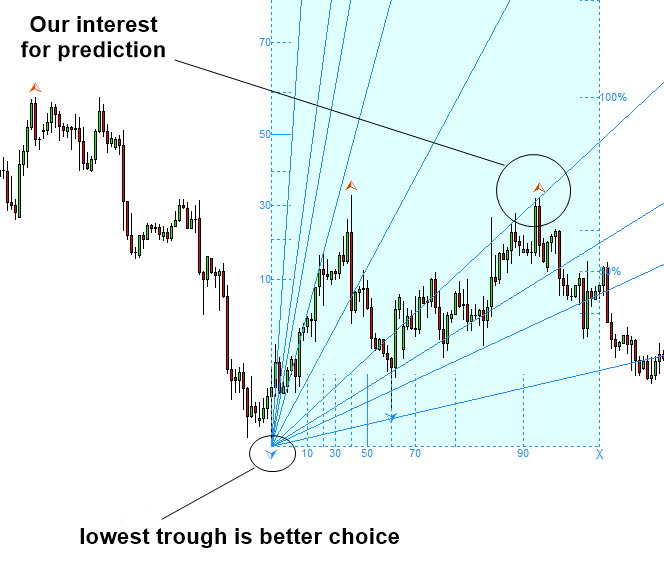 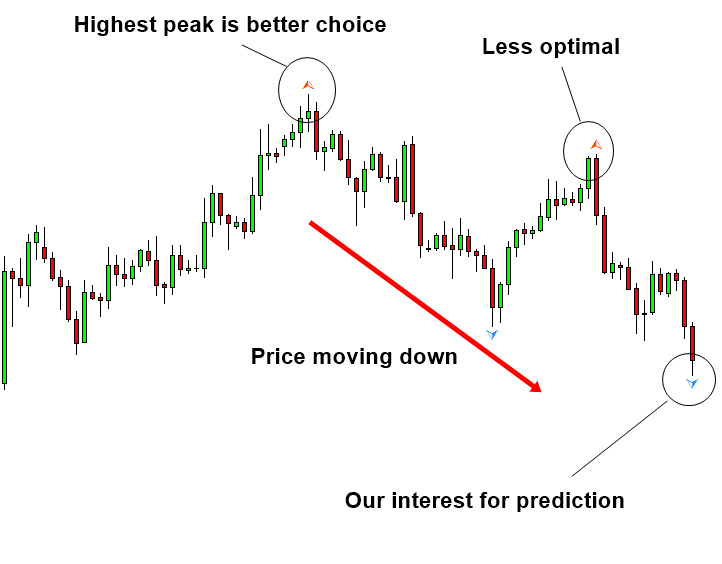 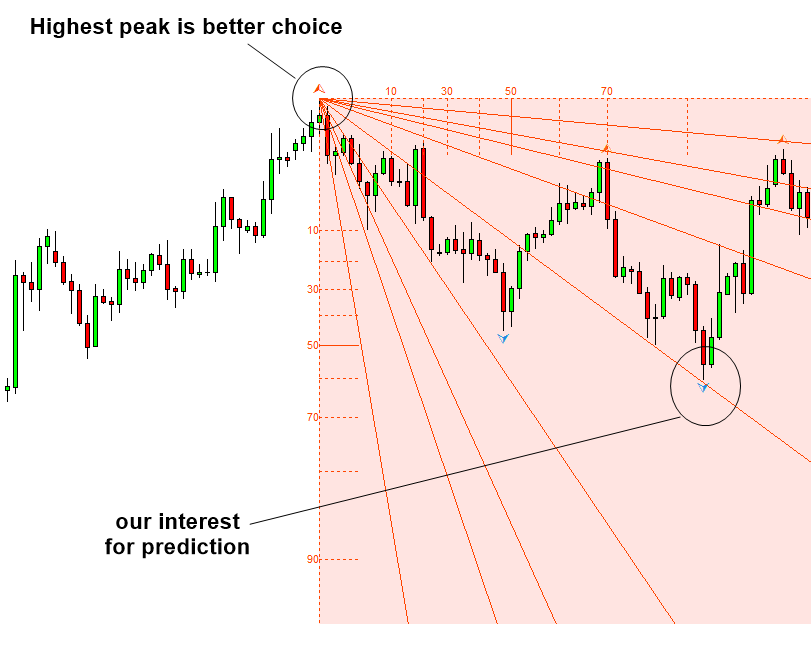 So far, we have covered the basics of Gann Angles. Next, we will introduce the advanced application of Gann Angles. The nine angle lines are useful in measuring the speed of the rising price. However, it is limited to the opposite case. By adding the mirrored lines of the nine Gann Angles through the time axis, we can create the reinforced version of Gann Angles. I personally call this 18 Gann angles as the Lotus formation as it resembles the appearance of the lotus flower (Figure 4.7-13). 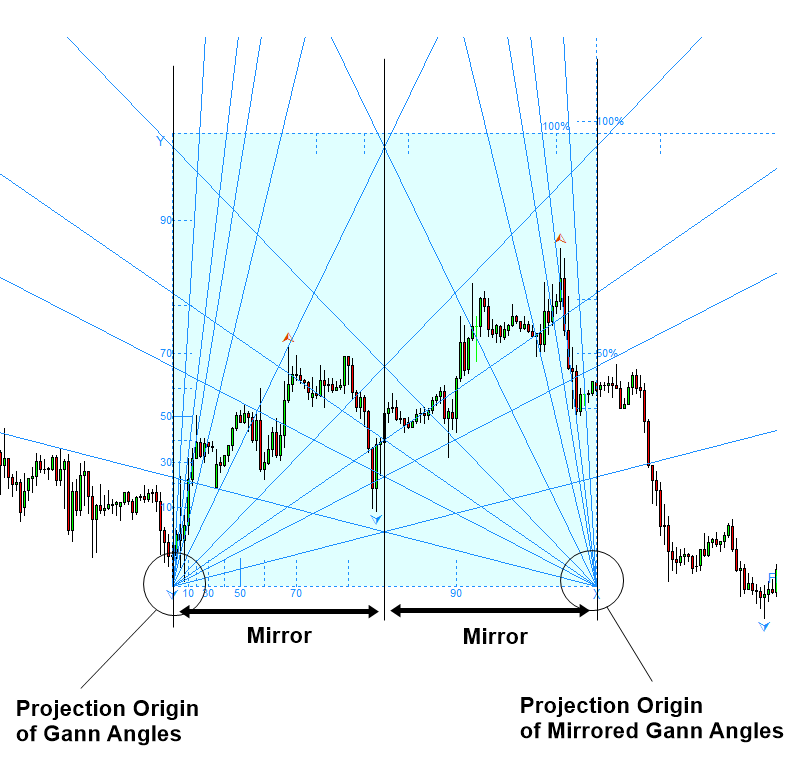 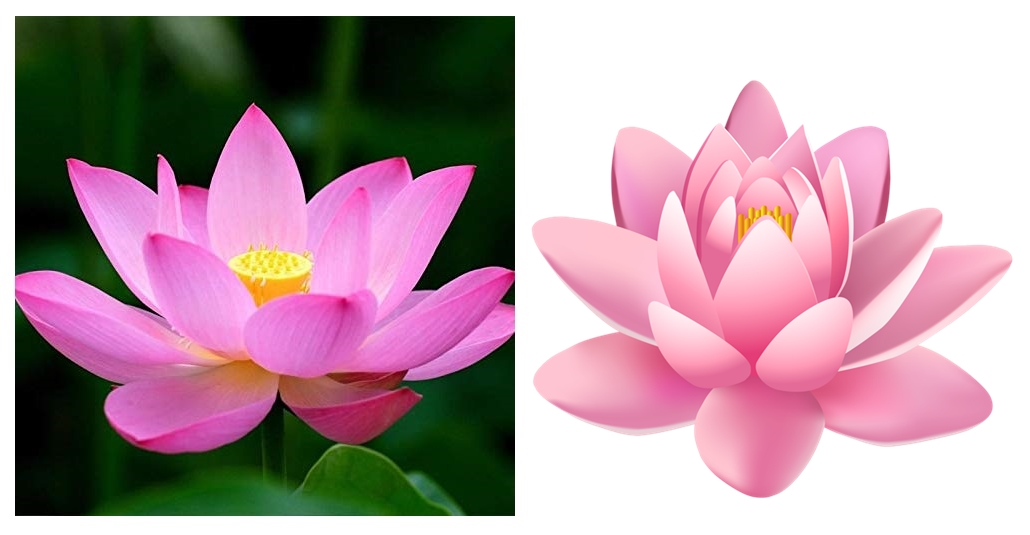 The usage of 18 Gann angles lines are the same. It is useful in measuring the speed of price. With 18 Gann Angles, we can measure the speed of falling price too. For example, when price rises, we use the Gann angles projected from the left bottom corner. When price falls, we use the Gann angles projected from the right bottom corner. This helps us to find out the intention of the market better. In Figure 4.7-15, we show the case in which the speed of falling price is slower than the speed of rising price. It is easier to guess that market sentiment is rather bullish by comparing of the two speeds. 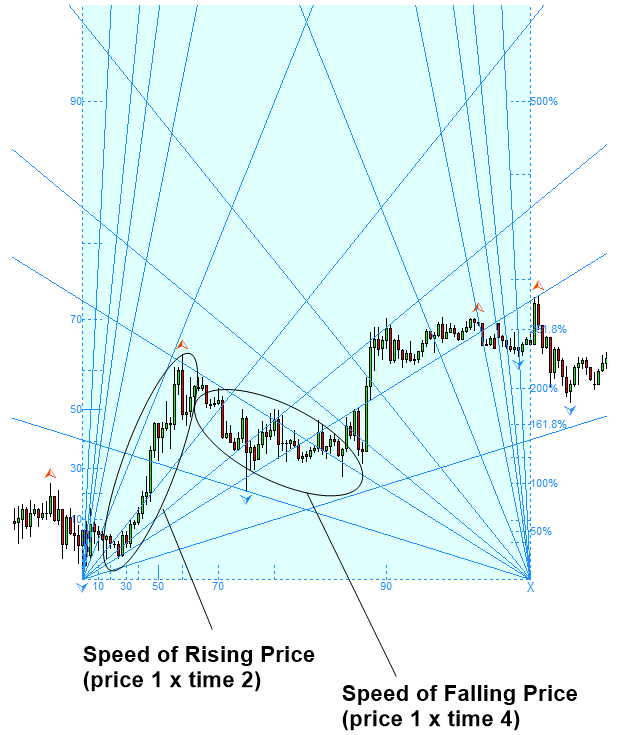 Another important usage of this 18 Gann angles is the provision of the reinforced support and resistance. When the mirrored Gann Angles cross the original Gann Angles, the crossed angle lines help us to define an important support and resistance. In Figure 4.7-16, we provide the example of reinforced support made from Gann Angle Cross + 61.8% Fibonacci Retracement. In this case, the support provided the robust turning point for the further impulsive bullish movement. 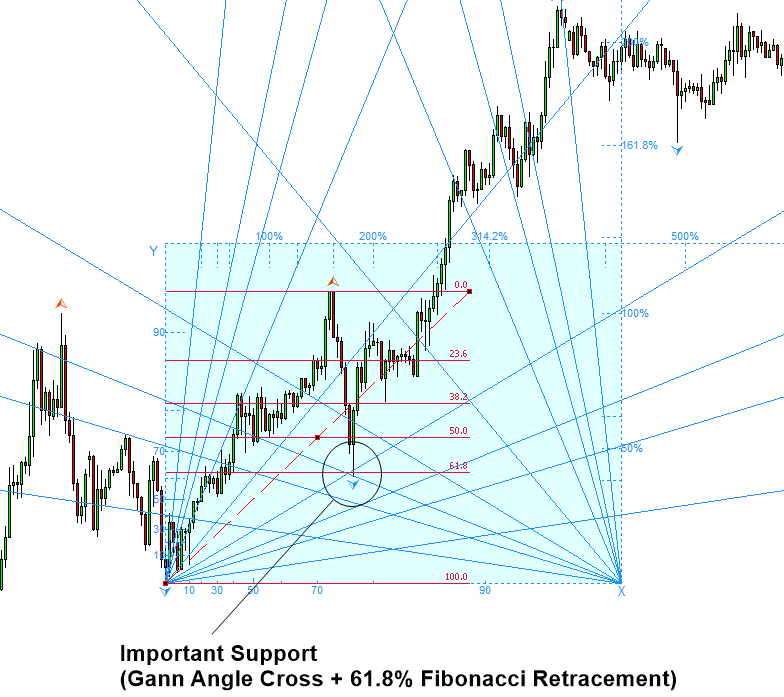 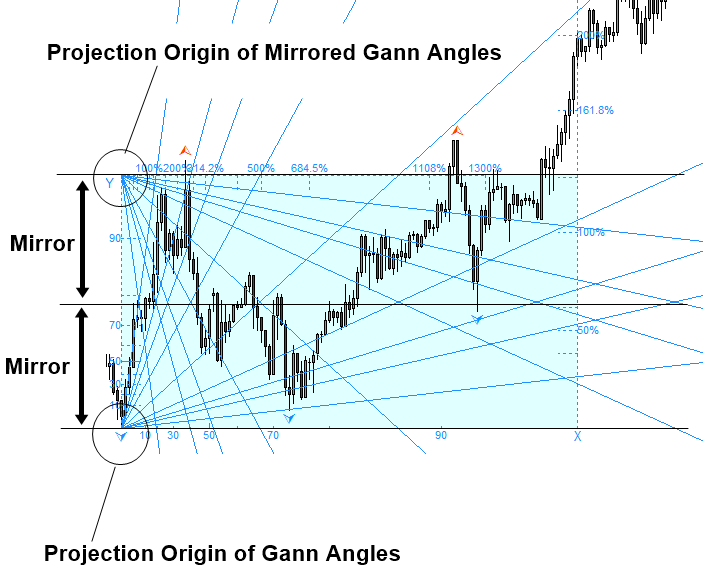 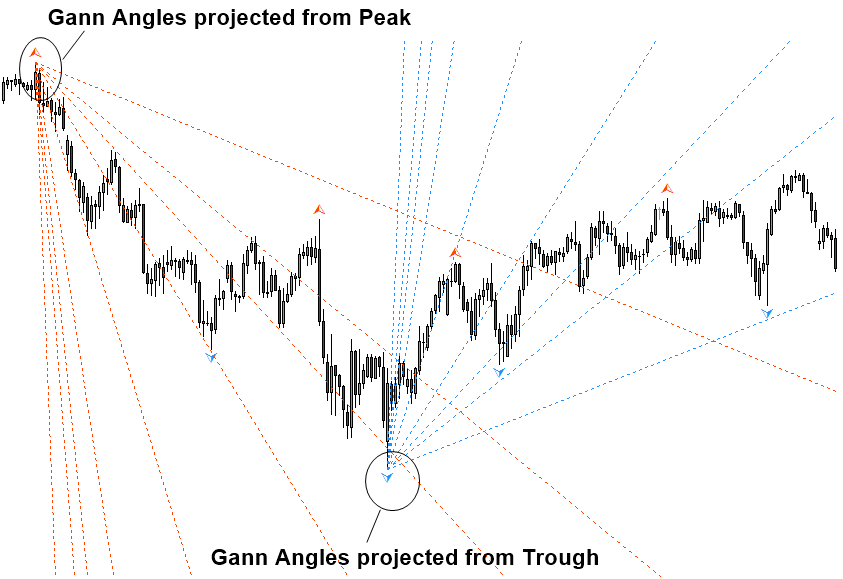 New Strategy Guide is coming for Gann Angles with Probability