In this chapter, we will show you how to combine statistical regularity and geometric regularity to trade with the most popular trading technique, the support and resistance. In the support and resistance, the geometric regularity is recognized when several peaks (or troughs) are aligned within one straight line. Especially, when three or more peaks (or troughs) are hitting the path of one straight line, it is hard to take this as the random event. When we add the statistical regularity in our decision-making process, we can even reduce the uncertainty further. Hence, we can improve our accuracy.

We have gathered some example of continuation pattern in Figure 4.4-1 and Figure 4.4-2. In the continuation pattern, we are trying to trade in the direction of the current trend. The trend can be confirmed with the slope of the support line. We need at least three points to confirm the support line. Three points is the absolute minimum to spot the geometric regularity. Actual trading can be taken after price complete the last point of the support line. Before entry, we need to see that price is moving in our anticipated direction. Hence, it is good to set some threshold price level to trigger around the support line. This is about geometric regularity part. To ensure the statistical regularity, we can exam Fibonacci Probability Graph as well as the joint probability matrix. In this example, we use the Fractal Cycle Analysis with two cycles. Hence, we will have the joint probability matrix with 2 rows x 2 columns.

Measured probability in Figure 4.4-1 in fact is not high. This is typical for the continuation pattern. Once trend is established, there is a tendency for the weak count trend (i.e. weak correction). Hence, the size of amplitude and wavelength can be relatively small in the case of the continuation pattern. Having said that, we still recommend seeing at least 50% of turning point probability in price or timing dimension. We took less probability in Figure 4.4-1 because the last point coincided with the 61.8% Fibonacci retracement in price. This provides the extra tick in the geometric regularity check-up. Typically, it is even better if we see at least 50% probability between small and large cycles.  Higher the probability, it is safer to trade. 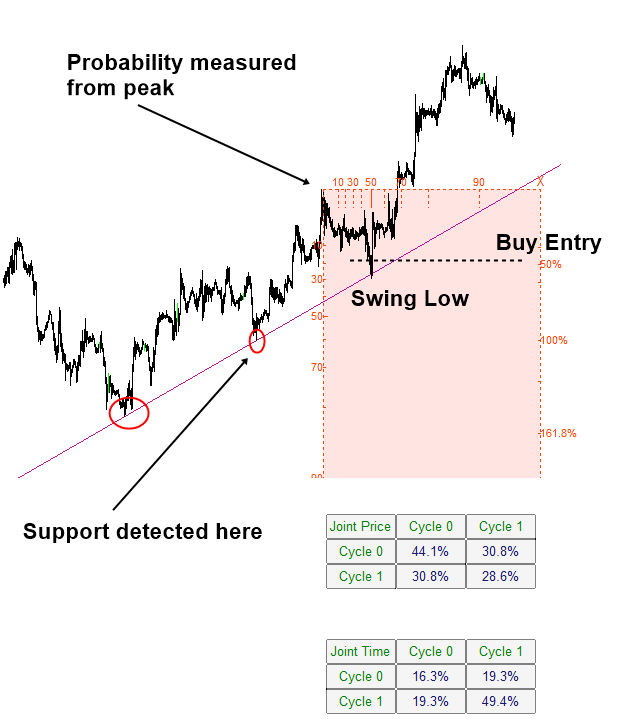 When you set the threshold price level to trigger around the support line, you can consider three different choices. We list the three choices in priority orders.

Firstly, you can use a sensible peak or trough around the support and resistance line. In this case, the peak or trough should be present near your trading entry. Secondly, you can use the sensible Fibonacci retracement in the left axis of Fibonacci probability graph. Thirdly, you can use the probability in the right axis of Fibonacci probability graph when either first or second choice is not available. Overall, the one of the important criteria to consider is to allow good spacing from the support and resistance level to your entry. If the spacing is too narrow, then you might be suffering from false breakout at the threshold level. If spacing is too wide, then you get the smaller Reward to Risk ratio. Although we have put the choice 3 to the bottom of the list, choice 3 might be useful to double check your spacing for the first choice and second choice. For this, you can refer to the previous chapter demonstrating how to measure the volatility of price using probability in the left axis of Fibonacci probability graph. 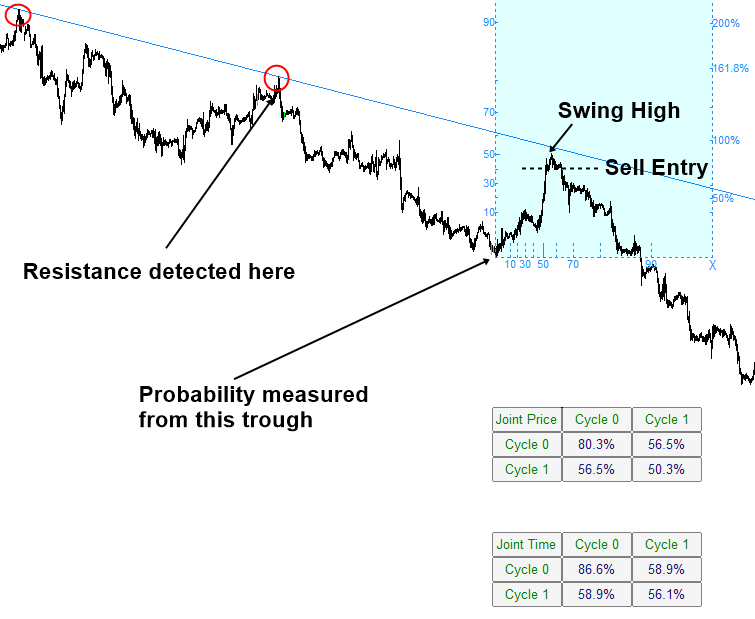 In the continuation pattern, we have set the three points as the absolute minimum to draw support and resistance. In the case of reversal pattern, we recommend to raise bar because we will be trading against the current trend. For example, we recommend using minimum four points as the bottom line. We also recommend seeing at least 90% probability either in price or in time dimension. For the case of reversal pattern, try to use the criteria that are more conservative. You can tell that the probabilities in the joint probability matrix are marginally different from the case of continuation pattern in Figure 4.4-1 and Figure 4.4-2. 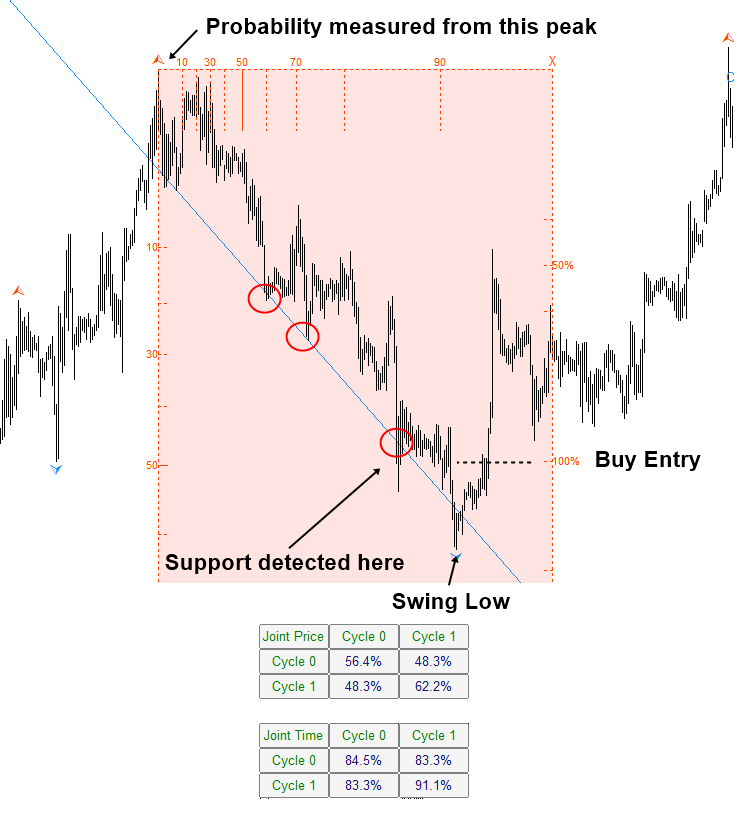 In terms of setting up the threshold price level to trigger your trading is not different from the continuation pattern. You can use one of the following three criteria to ensure good spacing from entry to the support or resistance.

In Figure 4.4-3, we used 100% Fibonacci retracement level to allow some good spacing between support and the threshold level (i.e. Choice 2). In Figure 4.4-4, we used the peak near the resistance to set threshold because the peak provided the sensible spacing. 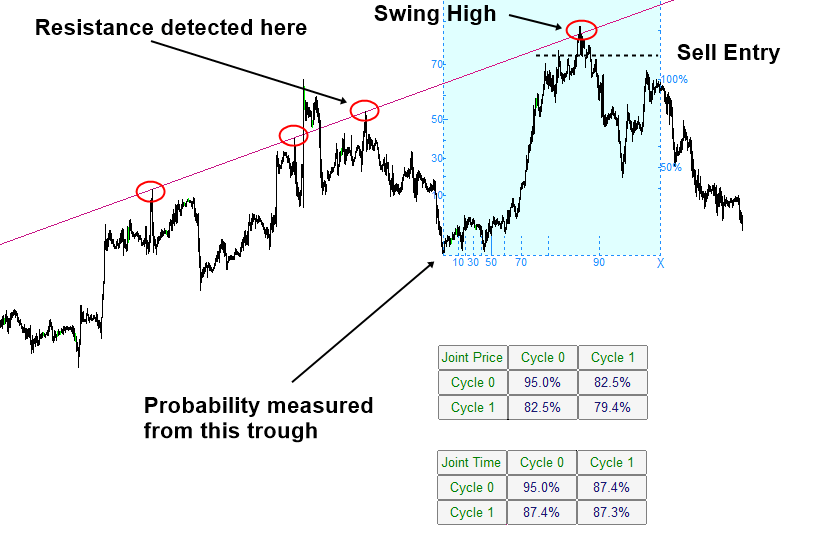