The Concept behind the Pattern Completion Interval

You are here: Home1 / User Post2 / Article3 / The Concept behind the Pattern Completion Interval

The Concept behind the Pattern Completion Interval (PCI)

Pattern Completion Interval is the emerging concept first introduced from this book. The concept was born after the extensive computerized research in tradable patterns in the financial market conducted by myself. Therefore, not many traders are aware of its existence yet. As you read this book, you will find out that it is extremely useful concept for your harmonic pattern trading. At the same time, the concept is not a rocket science. The concept is simple enough for any average trader for their practical trading. To understand the concept of the Pattern Completion Interval, we shall understand the term approximation first. Of course, everyone know the literal meaning of approximation. However, technically speaking, approximation make quite big influence every day in our life, but many people will not notice its impact unless you are the math geek crunching numbers all day in your job.

Whether you agree or not, approximation arises naturally every day in our life. There can be plenty of examples but we shall start with most intuitive one. Let us use the sprint record of Usain Bolt to learn about approximation. The record-breaking sprint of Usain Bolt was the popular coverage in many Newspapers during the 2016 Olympics since he was winning his third gold medal in 100 meter sprint. Here is simple but interesting three numbers about Usain Bolt, the fastest man in the world.

These three numbers can be true but maybe not. I am not suspecting about legitimacy of Usain Bolt’s record like the drug test results in the Olympics. I am pointing out that the measuring instrument, whoever measured, can only approximately measure these numbers up to certain degree. It is not because the measuring person did his job poorly but just because the instrument have own limitation to measure these numbers. For example, the sprint time might be 9.5823 seconds instead of 9.58 seconds. Maybe expressing it into 9582.3 milliseconds, we can be slightly more precise. However, still we are not dead accurate. To be dead accurate, we need infinite number of decimals to describe these numbers. This is impossible. Most of time, we will always approximate regardless of what measurement unit we are using.  Likewise, the height of Usain Bolt is only the approximation too. Precisely speaking it is impossible to tell if he is 1.963 meter tall or 1.962 meter tall. Besides the height and time approximation, you can probably find many other approximation examples in our daily life like weight, speed, calories, etc.

we are only approximating it. By now, you should realize that countless approximation influence in and out of your life. One negative example might be that my classmate in my old university in the United Kingdom, failed to achieve the First Class honor since his overall score was only 69.4. In British degree system, First Class honor is granted to the students achieving the overall score over 70. First class honor is the highest grade they can achieve under the British degree system. At the same time, the other mate scored 69.6 earned First Class honor. Apparently, the academic satisfaction for these two friends were very different. Even after graduate, when they find jobs or when they get married, when they do business, these Second Class and First Class label will definitely stick with them. Now you can probably imagine that our world is not as pretty and square as you think. Well the same thing goes to scanning of Harmonic Patterns from your chart too.

Pattern Completion interval build its concept over the approximation but nothing else. It is in fact based on the assumption that the measured ratio in the harmonic patterns are only an approximation. Ideally, the popular Gartley Pattern should consist of the ratios shown in Figure 2-1. It is because we assume that harmonic pattern should have the exact Fibonacci ratio in theory. However, when the Gartley pattern is detected by the pattern scanner, most of time the pattern will possess the approximated ratios, which closely match to the ideal Gartley pattern but not dead accurate. Well, one day you can be very lucky to find the perfect Gartly pattern with perfect ratio in your chart. This is very rare event. Even in this very rare event, the chance that your pattern will be truly perfect is very thin because the pattern scanner might round up the ratio AB/XA for 0.618 instead of 0.6181 or CD/BC for 1.272 instead of 1.2723. Approximation error is always there in our pattern detection task. We will never be able to get rid of them since we have only limited memories inside both human brains and computers.

Figure 2-1: Structure of Gartley Pattern for Bullish and Bearish Pattern.

Since this approximation exists every time in detecting harmonic pattern, we know that, we are less accurate every time when our pattern scanner measure the ratio 0.618 or 0.382 or other Fibonacci ratio from our chart. Well, this is very common facts in the scientific world. On the other hands, as this is so common, the scientist already gave a lot of thought in overcoming this approximation error rather than using infinite number of decimals to describe the measurement.

So how can we be overcome this approximation error? Typically, in practical application like engineering and statistics, people use tolerance as one possible way of describing the measurement. In technical term, tolerance is the total amount by which a specific dimension is permitted to vary. The tolerance is the difference between the maximum and minimum limits. Going back to our Usain Bolt’s sprint record. Instead of writing 9.58 seconds, we can write 9.58 seconds  0.005. This means that Usain Bolt’s record will not be greater than 9.585 seconds and it will not be smaller than 9.575 seconds. His record will fall somewhere in between 9.585 and 9.575. By assigning maximum and minimum tolerance limit, we can be more precise in recording his records. We can also avoid using the infinite decimal places to describe his record. Using infinite decimal places is impractical. Likewise, we can describe his height as 1.96  0.005. This means that his height will fall in between 1.965 and 1.955 meters.

How this tolerance can be related to the Pattern Completion Interval in our Harmonic Pattern trading? Well, Pattern Completion Interval is in fact no more than just the tolerance limit described above. It is indeed the upper and lower limit permitted to vary in detecting Harmonic Pattern. Since detecting Harmonic Pattern is quit visual task, it might be a good idea to show the pattern completion interval using a box like in Figure 2-2. In the AB=CD Bearish reversal Pattern in Figure 2-2, the upper limit is the maximum price level permitted for this pattern to be qualified as AB=CD Harmonic Pattern. If EURUSD goes beyond this Upper Limit, then the Pattern can not be qualified as the AB=CD pattern since the pattern is breaching the tolerance limit for the given Fibonacci ratio.

In general, the tolerance limit in many practical applications are specified in symmetric manner like 1.96 meters  0.005. Technically, we can assign symmetric Upper and Lower Limit for Pattern Completion Interval too. However, either one limit between Lower Limit and Upper Limit is relevant for our trading depending our trading direction. For example, for Bearish Reversal Pattern, we only need to concern about Upper Limit since we want to know when the Harmonic Pattern will fail to form from the price moving too high. Likewise, for Bullish Reversal Pattern, we only need to concern about Lower Limit. 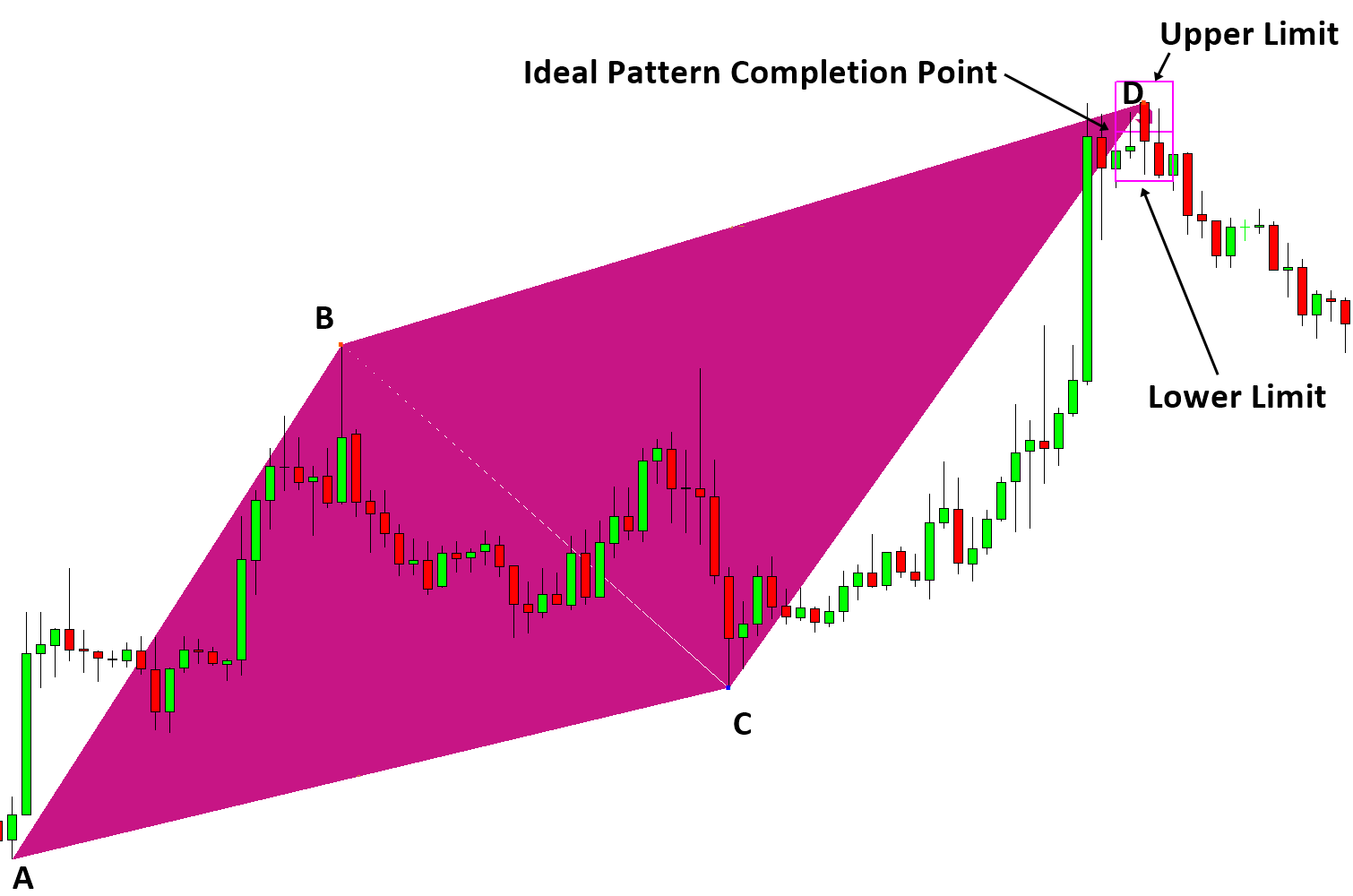 Another peculiar thing to discuss is that unlike our height and time example from Usain Bolt’s sprint, our pattern detection task involves several ratios and not just single ratio. For the Bearish AB=CD pattern in Figure 2-2, we will measure the ratio BC/AB and CD/BC together to check if these ratio are held near 0.618 and 1.271 respectively. Alternatively we can also check if the ratio is held near 0.786 and 1.618 respectively. Since we are checking two ratios, in fact we are concerning about 4 points for our pattern detection in our case of AB=CD pattern detection. Although the most important tolerance limit will be based on the final point D, one can still have the tolerance limits at the point A, B and C too. However, the tolerance limits at the point A, B and C are much less useful for our trading. In our operational definition, the Pattern Completion Interval is the tolerance limit at the final point D.

Pattern Completion interval and tolerance concept should clear up the most commonly asked questions from junior traders like: 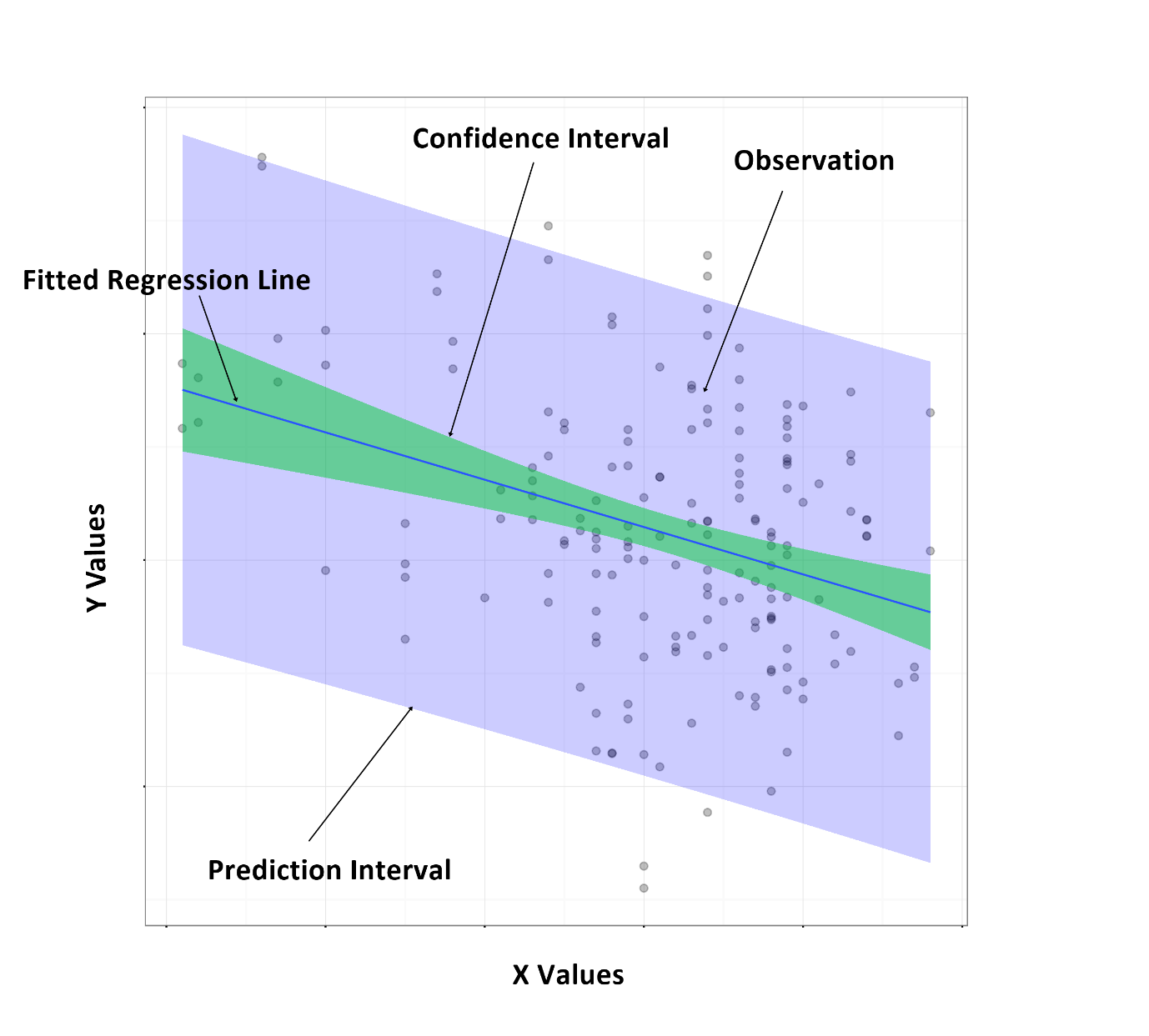