X3 Pattern Framework for the Day Trader in the Financial Market

You are here: Home1 / User Post2 / Article3 / X3 Pattern Framework for the Day Trader in the Financial Market

X3 Pattern Framework for the Day Trader in the Financial Market

Please note that this is the bonus chapter of the Book: Scientific Guide to Price Action and Pattern Trading (Subtitle: Wisdom of Trend, Cycle, and Fractal Wave) by Young Ho Seo. For the complete learning, we do recommend to read the original book.

1. Overview on Price Patterns in the Financial Market

2. Why Do We Need New Pattern Framework for day trading?

Firstly, price patterns in the financial market are not bounded by 4, 5 or 6 points only. The price patterns can have 10 or 15 points also or even more. They can come in various shape and in various complexity. For the time being, the community do not have intuitive and flexible pattern notation to adapt these new and more complex patterns for the future use. Most of them assume the fixed points for their patterns. For example, Elliott Wave theory uses the 12345 or ABC notation. For example, Wave .12345 and Wave .ABC patterns respectively consists of six points and four points. Likewise, Carny (1998) and Pesavento and Shapiro (1997) used XABCD notation for harmonic patterns. Many harmonic patterns consist of 4 to 6 points using XABCD notation. Either the XABCD notation or the 12345 notation is limited to describe patterns that are more complex.

3. How the X3 Pattern Framework is different from other Approaches

Before, many pattern frameworks including Elliott Wave theory or Harmonic Pattern and others used the points and lines to describe the patterns. In our new framework, we use a triangle to describe the patterns to provide the shortcut to understand them. We found that using triangle gives an unlimited flexibility to describe any simple and complex patterns with the shortest possible description. Meaning of X3 is the triangle, which is made up from 3 points. Another important point is that the X3 notation makes the extensive use of retracement ratio and expansion ratio. The retracement and expansion ratios are commonly used by Fibonacci trader and swing trader. Hence, X3 pattern framework is really the natural evolution of trading language based on what traders have built in the past. As you read this article, you would pick up all the essential elements of price pattern structure without too much hassle if you have at least studied any swing trading or Fibonacci trading methods.

X3 pattern framework is heavily relying on our previous research on Equilibrium Fractal Wave. Equilibrium Fractal Wave (EFW) is simply a triangle shaped wave repeating while price is moving towards the equilibrium price. This is an opposing concept to the Stationary Fractal Wave, which is always trying to revert to its mean. To someone less familiar with EFW, simply consider one EFW as one triangle made up from 3 points. However, we only consider the four types of triangles as shown in Figure 4-2. You have to understand that we do not concern all different types of triangle here. In theory, there is some difference between triangle and Equilibrium Fractal Wave. However, just to get you the intuition, we will often call one EFW as one triangle interchangeably in this book.

EFW is the building block of trend and fractal wave patterns in the financial market. Technically, we can use the peak trough transformation to transform the price series into EFWs. Some common peak transformation algorithms are found inside ZigZag indicator and Renko charts. These tools can be accessed by most of people free of charge nowadays. 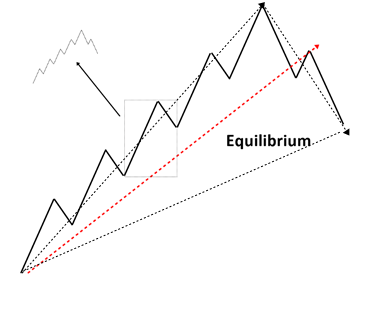 While price is moving towards the equilibrium price, EFW can have four shapes in general. Most of patterns in the financial markets can be achieved by combining any of these four shapes. 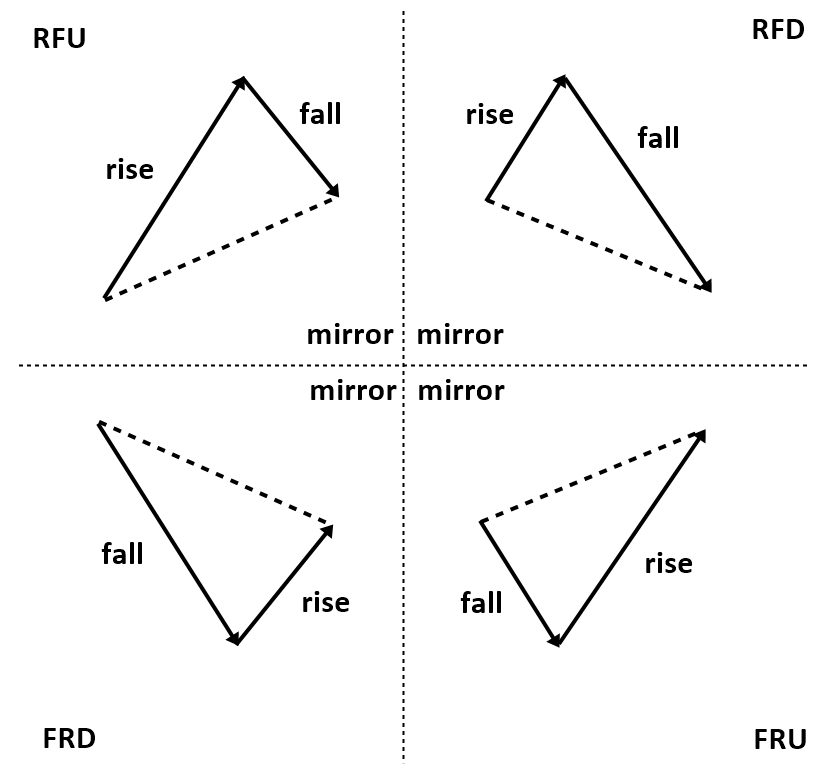 Figure 4-2: Four shapes of EFW in the financial market. 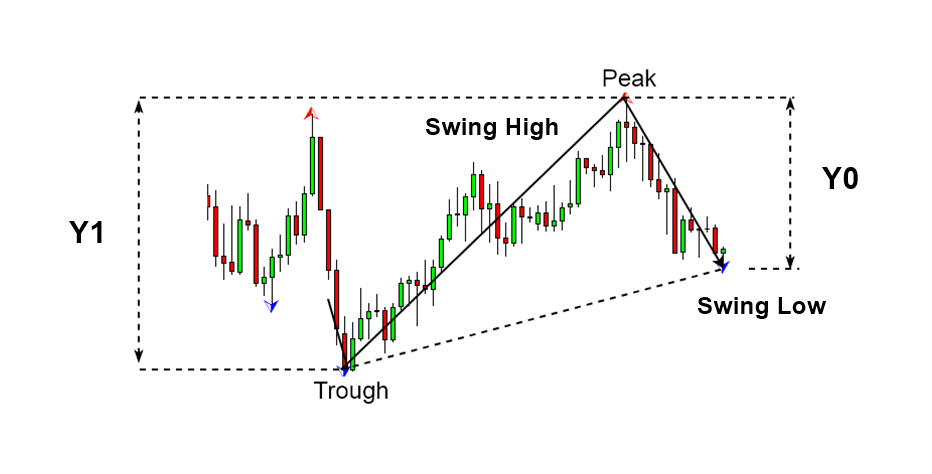 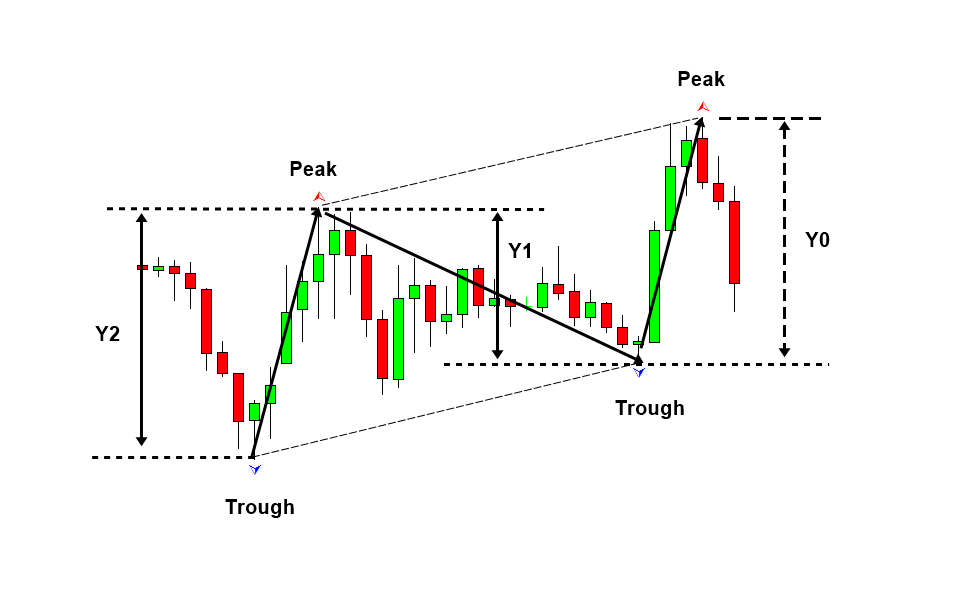 Likewise, we can describe each Triangle (or EFW) with lag operator too.

6. Closing Retracement Ratio to Describe the Structure of Pattern

This notation indicates that 0.618 ratio is assigned to the triangle (i.e. EFW) made up from 3 smaller triangles (i.e. EFWs) from Triangle 0. In another word, the retracement ratio of the bigger triangle consisting of Triangle 0, Triangle 1 and Triangle 2 is 0.618.

When 5 EFWs are combined to make up one bigger EFW with retracement ratio 1.272, we can simply express 5 EFWs like below:

This notation indicates that 1.272 ratio is assigned to the triangle made up from 5 triangles. In another words, the retracement ratio of the bigger triangle consisting of Triangle 0, Triangle 1, Triangle 2, Triangle 3 and Triangle 4 is 1.272. 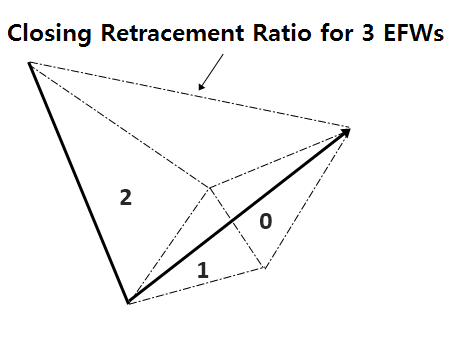 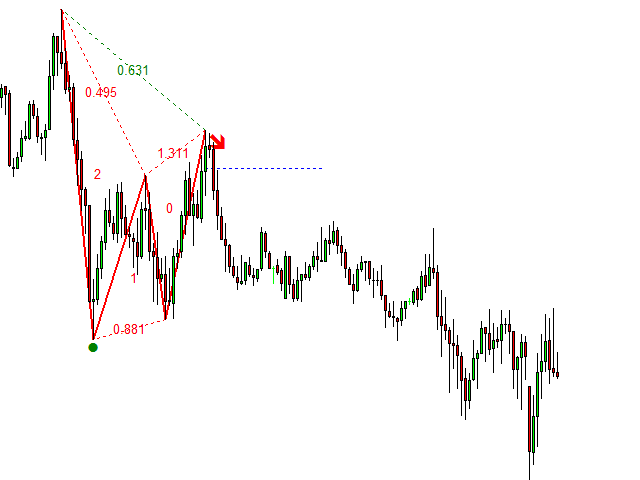 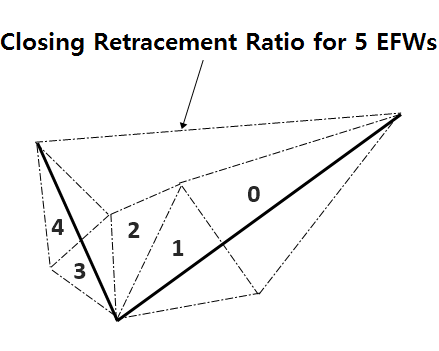 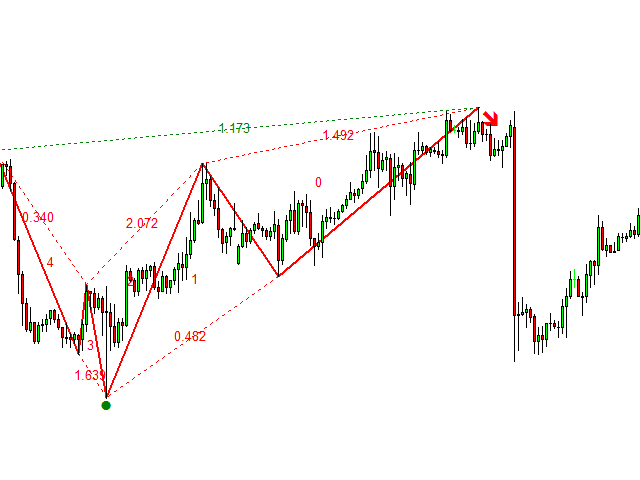 Sometimes we need to relate expansion ratio for different EFW rather than the adjacent EFW. For example, this sort of relationship is found frequently, when we describe the impulse wave in Elliott Wave Theory. 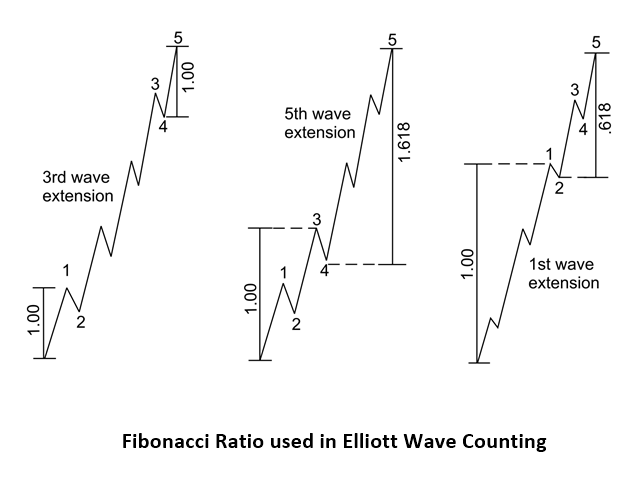 To describe the Elliott Wave with 3rd Wave Extension, we can describe it simply using Factored Expansion Ratio. 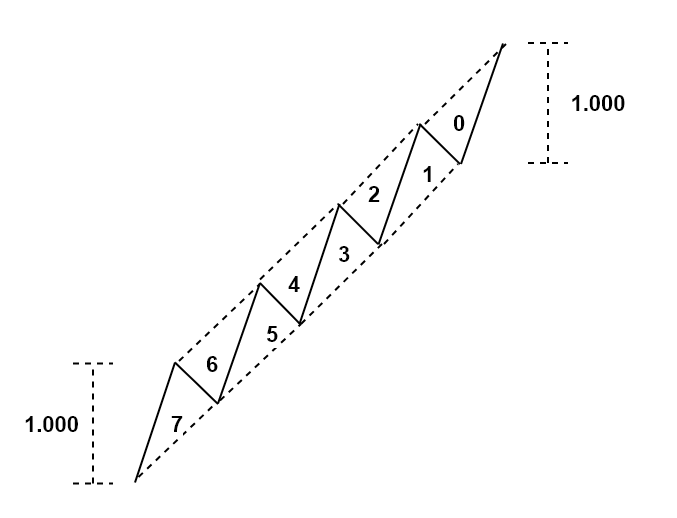 To describe the Elliott Wave with 5th Wave Extension, we can describe it simply using Factored Expansion Ratio. 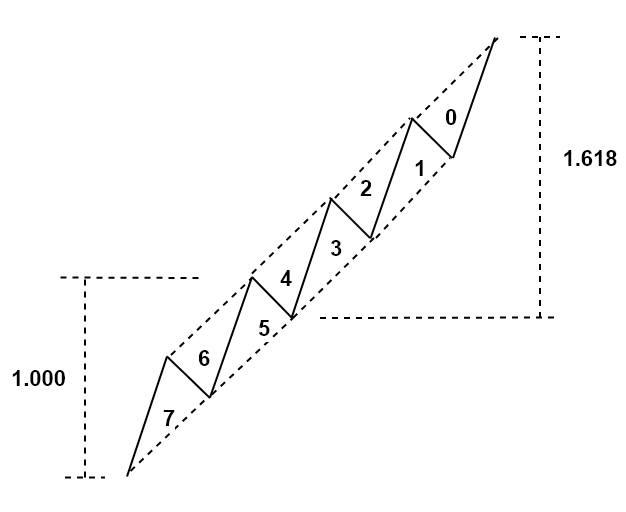 To understand these quantities, you do not need to understand a rocket science. As long as you understand that each triangle consists of right and left swing, rest of the calculation will be just followed. You just need to think about which triangle’s left and right swing you need to input for the calculation. Most of time profitable patterns including simple and complex one can be defined using these four quantities including Fibonacci patterns, Harmonic Patterns, and Elliott Wave patterns.

Number of Triangles = Number of Points in the pattern – 2.

Then any closing retracement ratio should be stated in the structure too if there is any. Of course, ideal ratio of each triangle should be reported by the pattern discoverer too. If the structure and ideal ratios are different from original pattern, then you should give the different name for the pattern or at least you should put “variation” to differentiate it from the original pattern. This is important because the variation can perform better or worse than original pattern in profitability. I personally think that the variation should be considered as a different pattern because they often return different trading performance in both backtesting and live forward testing. 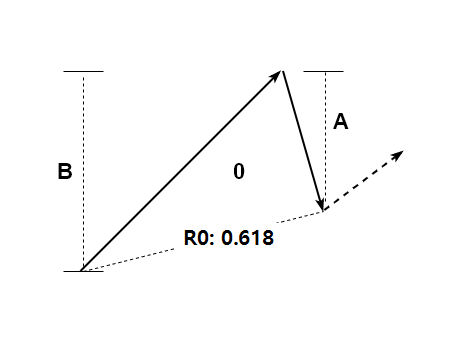 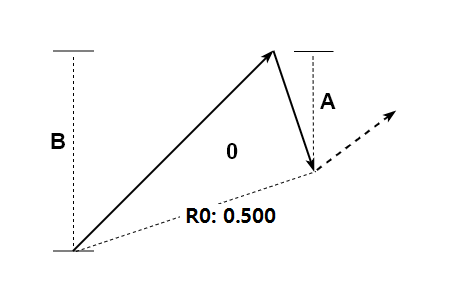 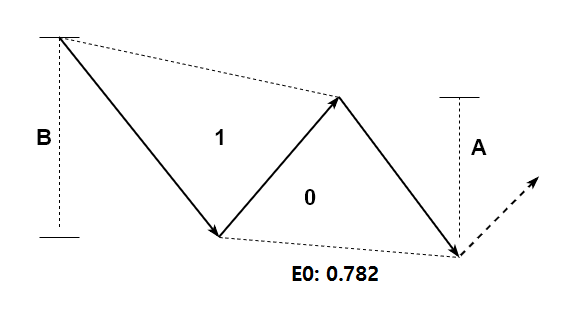 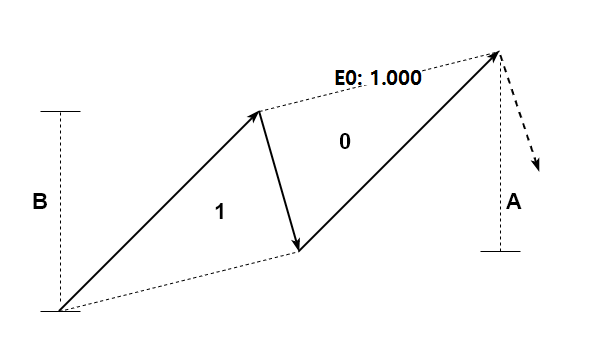 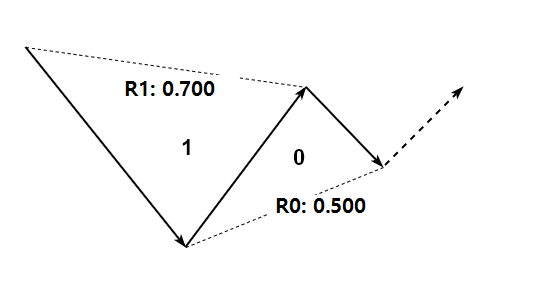 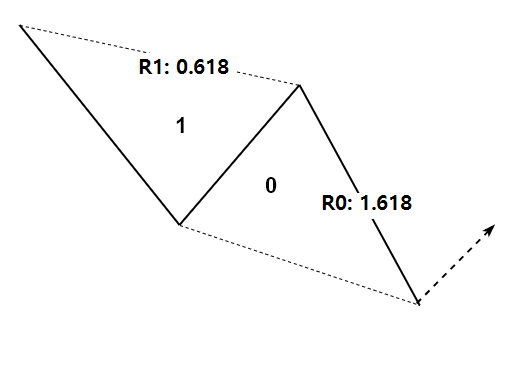 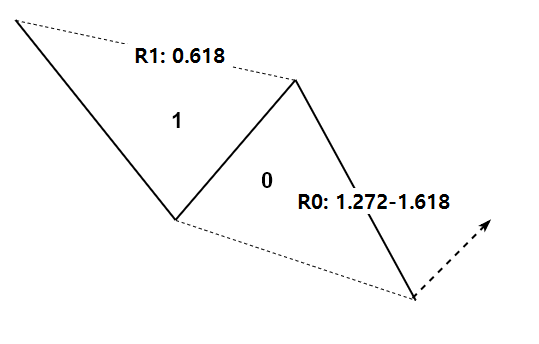 Description: Gartley pattern with first and second retracement defined only 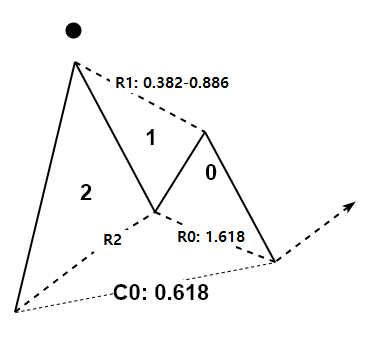 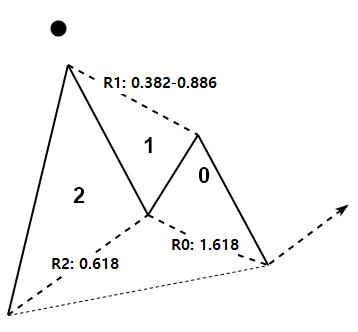 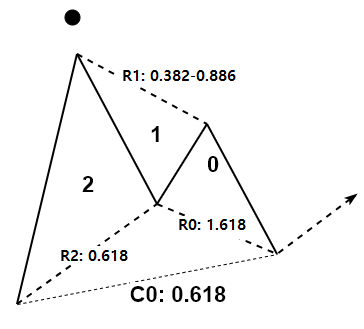 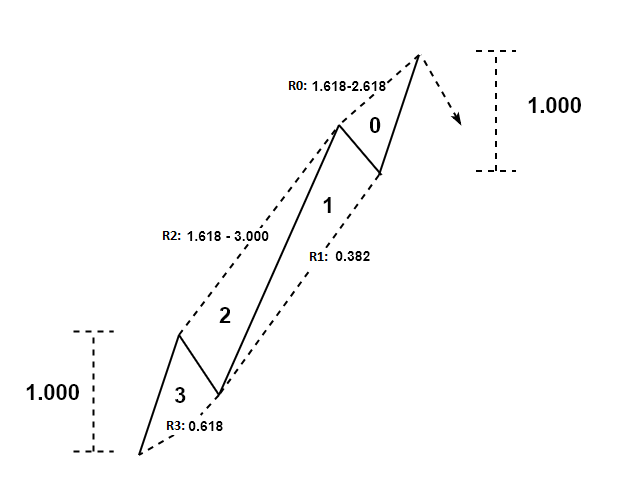 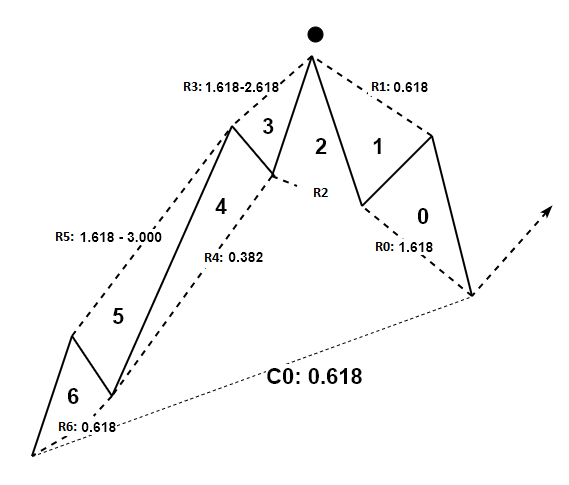 As you can see from the above examples, you can describe any price patterns in the financial market using X3 Pattern Notation just using short three lines. For example, when I first started with Elliott Wave theory, I had hard time of understanding Elliott Wave .12345ABC pattern from other textbooks. At the end of day, this complex pattern can be expressed in just three lines as above. Now, the communication is so much easier and it is even more accurate.  We leave less grey area in our pattern detection too.

For the scientific advancement in understanding the financial market, we probably need to study existing and new patterns outside our knowledge. X3 pattern framework allows us to study those patterns in systematic approach beyond what we found in last 100 years. Especially X3 pattern framework can always be used to test your idea with the particular price patterns. For example, Elliott Wave theory provides the generalization of how wave is propagating in the financial market. Many trader do not like the idea of generalization because one can create too many variations of the patterns under the same name. This sort of subjectivity is particular to Elliott Wave Theory and some other methods. However, there is nothing to worry. If you really want to use the Elliott Wave pattern in your live trading, then you just need to create the fixed pattern structure using the generalized guide. After created the pattern structure, test them in both backtesting and forward testing. You probably need to create several variations of the fixed pattern structure in your testing. Let X3 pattern framework handles all these variations in your testing. At the end of your research, pick the best performing one for your live trading.

Remember that to trade and to profit, you do need to use the pattern with fixed structure. You cannot trade with a pattern whose pattern structure is keep changing every time in your analysis. As soon as you are trying to trade with a pattern with changing structure, you will start to add a lot of subjectivity. This is the worst situation to avoid for your trading. For your winning pattern, always write down these three lines as below. Trade only if the patterns meet the structure you have defined. Otherwise, do not qualify the pattern to trade.

Anyway, this is what professional trader is doing every day to find the right entry with less subjectivity. X3 Pattern framework is the fast track learning method for all existing price patterns. At the same time, it is friendly to most of trader because its concept uses the retracement and expansion ratio from the popular Fibonacci Analysis and Swing Trading. We hope every trader getting the unlimited benefits of this powerful pattern framework.

What are the Profitable Chart Pattern ?
Scroll to top